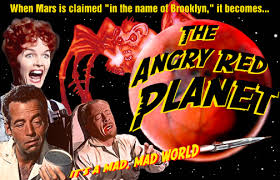 This film literally has you seeing red!
Advertisement:

With a budget of $200,000 to make the film and given only nine to ten days to shoot the film, director Ib Melchior gives us The Angry Red Planet, a 1959 science fiction film that necessitated the use of CineMagic technique. The CineMagic technique, used for all scenes of the Martian surface, involved the usage of hand drawn animation used in conjunction with live-action footage to create an alien atmosphere that was revolutionary for the time.