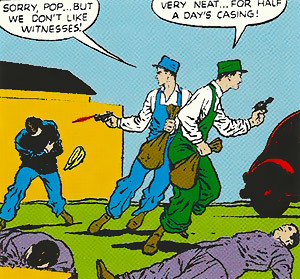 Sometimes you just can't afford to be seen. Everybody needs to believe you're dead. Or they saw you use superpowers, or now they know there are such things as werewolves. Or they'll just testify against you and make you go to jail. Or they want to prevent a Cycle of Revenge from happening in the most direct way.

So you have to kill everyone in the room. Or, possibly, the city.

Similar to Shoot Everything That Moves, but that trope is more about the situation where everything you see is a threat. In this case, people would be more than happy to leave you alone, but that just doesn't seem to be an option anymore.

Oh, by the way, if you're a Mook and you've been ordered to kill all the witnesses, one thing to keep in mind: As far as your boss is concerned, you're a witness, too.

A specific case — often invoked by otherwise-heroic characters who need to eliminate individuals who might jeopardize their mission — would be Killed to Uphold the Masquerade. People who are Trigger Happy may jump to this solution a bit more readily. See also Never One Murder. Contrast with Leave No Survivors, where you're killing everyone just out of general bloody-mindedness (or hatred). Opposed to Spare a Messenger, when you specifically leave someone alive to relate what they've just seen.

Alternative Title(s): Kill All The Witnesses