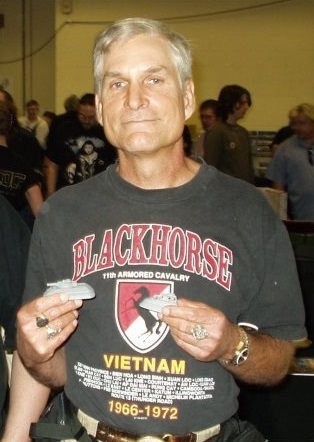 "The use of force is always an answer to problems. Whether or not it's a satisfactory answer depends on a number of things, not least the personality of the person making the determination. Force isn't an attractive answer, though. I would not be true to myself or to the people I served with in 1970 if I did not make that realization clear."
— David Drake, The Voyage
Advertisement:

(born September 24, 1945) is the author of several sci-fi series, including RCN and Hammer's Slammers, and has a major fantasy series, The Lord of the Isles.

One of the current gods of Military SF, along with Jerry Pournelle, S.M. Stirling, and David Weber — in spite of not regularly writing any military SF anymore. (Unless you count Naval Space Opera.) Known for his explicit and graphic depictions of the effects of warfare on both human bodies and human societies.

Drake is, as described in the book jacket for The Dance of Time:

"His stint at Duke University Law School was interrupted for two years by the U. S. Army, where he served as an enlisted interrogator with the 11th Armored Cavalry

in Vietnam and Cambodia."

Works by David Drake (solo or in collaboration) with their own pages:

Other works by David Drake provide examples of: