Cowboy BeBop at His Computer 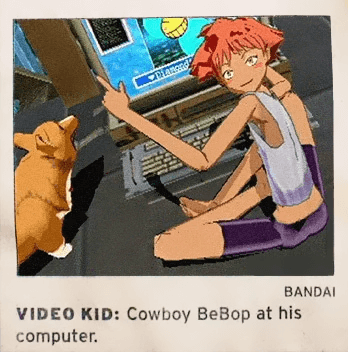 "Cowboy" means Bounty Hunter, "Bebop" is the name of the Cool Starship, her name is Ed, and that's not her computer. The only part of that caption that stands up to the slightest scrutiny is the word "at".
"Everything you read in the newspapers is absolutely true except for that rare story of which you happen to have firsthand knowledge."
— Erwin Knoll
Advertisement:

This is when the media reports blatantly incorrect facts about a creative work that any fan or — in the most egregious cases — even just someone with any kind of passing knowledge of said work would know to be wrong. It seems like some people just can't be bothered to do any fact-checking. Let's face it — sometimes, it's easy to do. But what about the news? Newspapers, a News Broadcast, national news, etc.? It is in their job description to do at least some research, to make sure they aren't stating factual untruths.

This rule apparently doesn't apply much to works of fiction. Maybe the news media doesn't seem to care as much about it in question as about whatever effect it had. But that's no reason to make an error that could have been avoided by looking into the material a bit, especially if said error involves serious accusations like blaming a child's death on imitating something they saw on TV. This often results in examples either factually incorrect, from minor to grossly wrong like the Trope Namer itself, or taking some "facts" from The Theme Park Version of a larger entity, which to some is much worse than just not doing the research.

Subtrope of "Common Knowledge". Compare Complaining About Shows You Don't Watch. See also Fandom-Enraging Misconception (for particular errors that will incur the wrath of the fandom), Animation Age Ghetto (when people dismiss various kinds of cartoons as family-friendly when they, in fact, are anything but) and All Anime Is Naughty Tentacles (a problem endemic to Anime and Manga). I Am Not Shazam is a key trope involved. Also compare Dan Browned, the version for fictional works. Also see New Media Are Evil, though if you find yourself constantly annoyed by this kind of thing then you probably believe Old Media Are Evil. May also overlap with a Shallow Parody if the parodists in question are really careless with their research.

"TV Tropes is a character on a TV channel of the same name who helps it depict various clichéd elements where even sitting on a chair is applicable to a work. You can waste a whole day watching it!"
Feedback

Example of:
Cowboy BeBop at His Computer