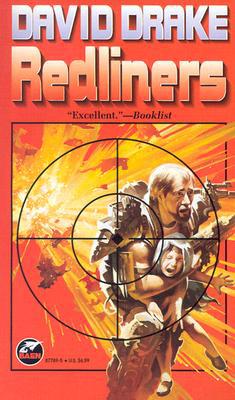 Redliners is a Military Science Fiction story by David Drake about a burnt-out elite unit sent to guard a group of involuntary colonists on a Death World.

The human civilisation is at war with the Kalendru (nicknamed "spooks''), a race of aliens who "understand the concepts of 'master' and 'slave' but not of "equals." Strike Force Company C41's veterans have all "redlined" - become too dangerous to re-integrate into civilian society - after a mission goes disastrously wrong. However, the bureaucrat in charge of the Unity wants to run an experiment to give the redlined strikers a chance to redeem themselves.

Can be found online for free here

or downloaded in a variety of formats here

The setting provides examples of the following tropes: