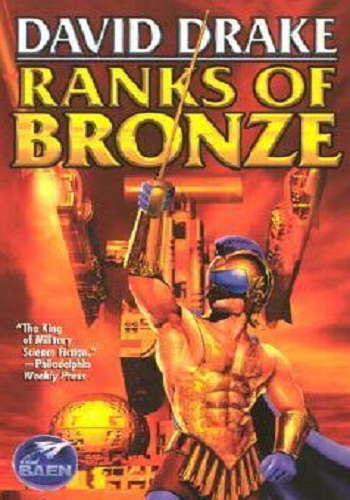 We're soldiers. Warriors are meat on the table for soldiers with discipline.
— Centurion Clodius Afer
They were Roman soldiers—and they were still alive because there were no better killers in the galaxy.
— Tagline
Advertisement:

Ranks of Bronze is a science fiction short story, later expanded into a novel, written by David Drake.

After the defeat at Carrhae, a captured Roman legion is sold into slavery ... to a guild of galactic traders. The Federation has banned the use of lasers and other high-tech weaponry against primitive civilizations, so they are looking for an army of low-tech soldiers to help them secure trading rights on alien planets. Their new masters provide them with long-life treatments, promising them

The anthology Foreign Legions, edited by David Drake, contains a number of short stories by various authors which expand the universe. David Weber's The Excalibur Alternative is based on a short story within the anthology.

The setting provides examples of the following tropes: