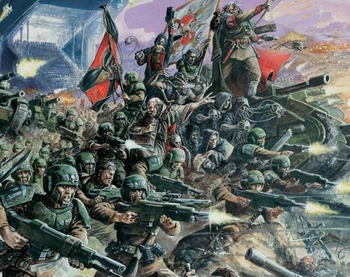 In the grim darkness of the far future, humanity's hat is a little green flak helmet.note That and bastardry. But then so is everybody else's.
"Mankind has had ten thousand years experience of warfare and if he must fight he has no excuse for not fighting well."
— T. E. Lawrence
Advertisement:

Somewhere between Humans Are the Real Monsters, Humans Are Special, Humans Are Survivors and Humanity Is Superior lies this trope, the polar opposite of Humans Are Diplomats. Compared to the other races of the galaxy, or at least the other 'good' races, humans are violent, warlike savages who revel in chaos and destruction. However, this is not necessarily a bad thing; at worst, the more 'civilized' races may look down on us, but they acknowledge that we're not a plague to be wiped out. Or at least they acknowledge that it might be somewhat inadvisable to try.

The trope takes one of three forms:

Compare Heroic Spirit. Contrast Humans Are Diplomats, where we're the ones keeping the peace for everyone else.

It's probably advisable not to include Real Life examples, since, as noted on the page for Proud Warrior Race, it's hard to name a human culture that isn't known for have something that could be called a warrior tradition.

This has led to a genre of science fiction politely referred to as "HFY" ("Humanity, Fuck Yeah!"

), about humanity turning out to be much tougher and stronger than alien species. Often this involves describing the very real but absurd-sounding capabilities of humans compared to other animals.

Examples of the "Survivors" variation include:

Examples of the "Useful" variation include:

Examples of the "Soldiers" variation include: