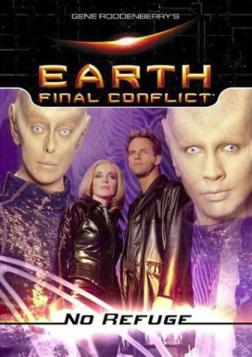 They are the companions. Aliens come to earth on a mission of peace. Their true mission and the secrets they hide, forever altering humanity.
— Season 2 introduction
"There are powers that you do not understand guarding you, Liam."
— Da'an
Advertisement:

Earth: Final Conflict is a television series that lasted from October 1997 to May 2002, for a total of 110 episodes in 5 seasons. Like Andromeda, this is not a show Gene Roddenberry managed to create from his grave, but was produced by his widow Majel Barrett-Roddenberry. Everything that he demanded from Star Trek (like a positive view on the future, no internal character conflicts, to make exploration and not war) is completely absent. The only Trek it bears the vaguest of resemblance to is Deep Space 9 for the prominence of properly masked dei ex machina, the everlasting feel that "it was all meant to be" and, in no uncertain terms, the multidimensional depth of both the Villains and the Heroes. The name of the show was originally going to be Battleground: Earth, but the producers wanted to avoid sounding too similar to Battlefield Earth.

As the title might suggest, it takes place on Earth, a very lethal place as many characters die swiftly after being introduced. It's also one of the few series to kill off its lead after the first season. The series starts by showing us it has been three years since a Sufficiently Advanced Alien race called the "Taelons" arrived on Earth. They have since removed all hunger, war, and societal ills from our planet, but a human resistance movement (known, appropriately, as The Resistance) essentially wants to know the price-tag for all these benefits. Naturally, it turns out that the Taelons have a hidden agenda.

It takes Always Chaotic Evil, tells it it sucks, and then throws it through a portal into space. The alien species in the show seem even more divided than humans in their political goals and even more so in how to achieve them. The Taelons aren't outright evil at all, the Taelon characters are as diverse in how evil they are as the human ones. And it turns out to be a lot more complex as both species are intertwined into some extremely vague purpose and need each other for survival. The second main character also was an alien hybrid. In a lot of ways, it was like V (1983) only much more complex and with no clear good guy, bad guy or motivations.

Infamous for its final season, which radically altered the show's cast (again) and very premise to the point of it being more like a Spin-Off. A major supporting character suddenly became the central protagonist, and the Taelons were replaced with a much less ambiguously villainous species.