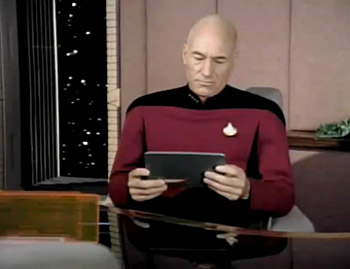 Number One, pull up the IGN guide for level 4-7 of Angry Birds.
In many science-fiction works, even those pre-dating tablet computers by decades, the most common form of portable computer is a flat, rectangular slab held in one hand and operated with the other. Usually called a Data Pad or some similar name. Like its spiritual companion, the communicator (AKA the cell phone in your pocket), it's now completely defictionalized in the form of the tablet computer.
Advertisement:

In Science Fiction settings, it can also work as a Clipboard of Authority, or sometimes as a Super Wrist-Gadget.