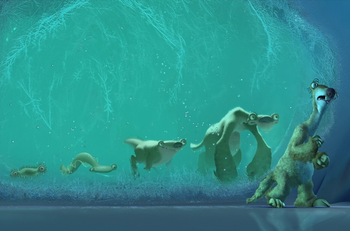 Evolution, in reality, is a giant amalgam of changes over time caused by stressors or preferential mutations. Mutations don't occur all at once, there is no definite line where you can say one species ends and its evolutionary descendant(s) begin(s).
Advertisement:

In fiction however, it is much more likely to be divided into neat little sections that correspond to various levels. In many cases, there will be a direction that evolution is moving toward, generally ending at Energy Beings or the Ultimate Life Form. The Evilutionary Biologist's end goal is to move humanity up to the next level.

When it's one animal, or evolution is more like a metamorphosis, that's Evolution Powerup. You can move forward and backwards along the various levels with the aid of a Devolution Device (any thing where you can only move backwards because forward won't work because evolution hasn't been decided yet, is likely doing that rare instance of averting Goal-Oriented Evolution).

Subtrope of Hollywood Evolution. See Intelligent Gerbil for the way animals always evolve into sentient humanoids. See A God Am I for one end result of sufficient hopping through Evolutionary Levels. See Ascend to a Higher Plane of Existence for another. For super power inheritance, see Lamarck Was Right and Superpowerful Genetics. For cases where one jumps levels through use of technology or magic, see Transhuman. And when each generation is on a higher "level" than the previous one, get ready for some Goo-Goo-Godlike action. For villains using this, see The Social Darwinist, Evilutionary Biologist, Evil Evolves and anyone who believes in Goal-Oriented Evolution. Sometimes, a creature may have LEGO Genetics to skip up the steps. Members of the higher evolutionary level will often end up fighting members of the lower level, resulting in a Clash of Evolutionary Levels. In some depictions this trope can be Truth in Television when outside events affecting evolutionary pressure cause evolutionary changes so quickly that the fossil record can't keep up.

The Ultimate Life Form is at the top of these levels.

Note that there is a legitimate evolutionary theory termed "punctuated equilibrium" which says that a species may remain unchanged, in an unchanging environment, for many generations, then experience a sudden, sometimes dramatic, change, triggered by a change in the environment. (For example, a species of deer may be perfectly suited to the island it has lived on for centuries, but when a volcano erupts next island over and the less hardy plants die off, those deer best able to switch to the remaining plants will be the ones to survive and reproduce, becoming a new species in a relatively short time.) The resulting new species are not "better" or "more advanced," only more adapted to the new environment than the previous species was. And it's still a gradual process that takes many generations, with no clear-cut division between where the older species ends and the new one begins.

This has a grain of truth with technological evolution (which is arguably where the idea comes from), with modern tools and techniques outperforming earlier ones in the same tasks. But more advanced tools also rely on the presence of modern materials, manufacturing technologies and related infrastructure — which all ultimately boil down to the entire pool of required knowledge (including that of the users) and resources — so they technically fit into a different environment than their predecessors. This can lead to older tools stealing the spotlight when those requirements are suddenly no longer met.

According to Faora, people with no sense of morality have "an evolutionary advantage" over those that have one, and "evolution always wins".

According to Faora, people with no sense of morality have "an evolutionary advantage" over those that have one, and "evolution always wins".