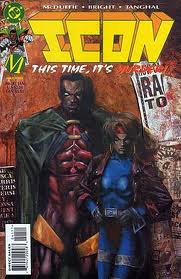 It's not as 'street' as it looks
Advertisement:

Icon is a Milestone Comics superhero series written by Dwayne McDuffie, which ran from 1993-1997. Along with the other Milestone characters, he has recently been imported into the DC Universe. (Only he and Superman know that the Dakotaverse had its own, separate existence.)

Augustus Freeman IV, in reality an alien space traveler stranded on Earth, is persuaded by a young woman, Raquel Ervin, to use his alien powers to become a superhero. He takes the name Icon, and Racquel becomes his sidekick, Rocket.