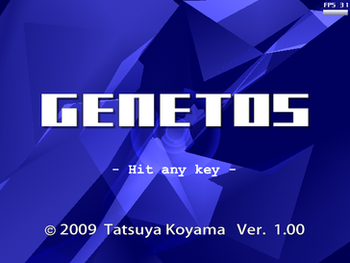 From Space Invaders all the way to modern-day Bullet Hell!
Hello, Hello.
This is the Planet Genetos.
Who are you?
Advertisement:

Genetos is a freeware Shoot 'Em Up game with an "evolution" theme. Each level mimics a different era, going from a Space Invaders homage through the nineties and up to Bullet Hell, and each has an associated ship, from a simple left-and-right-moving white blob to a sophisticated weapon of mass destruction with bombs and lasers. The game can be downloaded here.