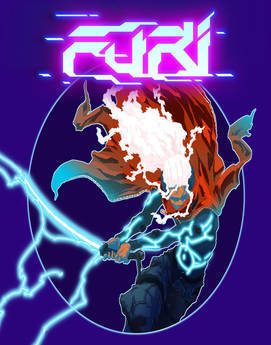 What will you fight for?
"The Jailer is the key, kill him, and you will be free."
— The Voice
Advertisement:

Furi is an Action Game / Bullet Hell / Boss Game developed and published by The Game Bakers, released on July 5th, 2016 and featuring character and art designs by Takashi Okazaki and an OST made by an assortment of Electronica artists.

In it you play "The Stranger", a highly skilled and powerful warrior who is suddenly released from his torture chamber by a mysterious man wearing a rabbit mask. Your goal is simple. Escape. The problem? Everyone in your path is a full fledged badass dedicated to keeping you locked away, and they do NOT appreciate your jailbreak attempt. The solution? Kill your way past your jailers and descend your prison so you can reclaim your freedom.

A surprise came on May 3rd 2022, with the announcement

of the Onnamusha DLC, which adds in the titular Distaff Counterpart of the Stranger as an alternate playable option who plays substantially different from him while bundling One More Fight within itself as well. It released on May 17th 2022.