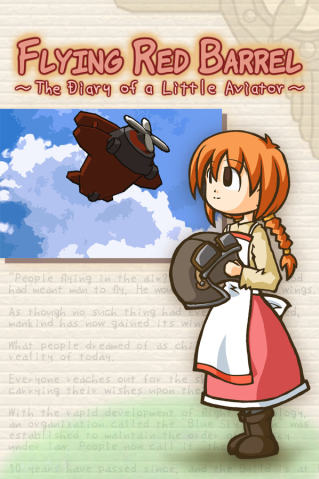 A story of a little aviator and her plane.
"People flying in the air? What balony! If God had meant man to fly, He would have given them wings."
As though no such thing had been uttered, mankind has now gained its wings.
What people dreamed of as children is the reality of today.
Everyone reaches out to the sky together, carrying their wishes upon their wings.
With the rapid development of flight technology, an organization called the "Blue Sky Union" was established to maintain the order of the sky under law. People now call it "the Guild."
Ten years have passed since, and the Guild is at last about to put an end to the prolonged anarchy in the sky.
This is a story of one of the aviators living in that era.
— Taken from the game's intro
Advertisement:

Flying Red Barrel ~The Diary of a Little Aviator~ is a doujin shoot 'em up game by Orange_Juice, the creators of SUGURI and QP Shooting, and was released for Windows during Winter Comiket 73 on December 31, 2007.

Its story takes place at a rural countryside at an age where aeroplanes was recently invented. The plot centers around Marc, a young aviator and pilot of the titular Red Barrel, who serves as a member of the "Blue Sky Union" (or the "Guild", as it's more commonly known), an organization that protects the skies. During Marc's adventures, she crosses paths with Guild member Peat, Marc's friend Fernet, who has become annoyed with Marc's increasing focus of working at the Guild, outlaws, rebellious sky pirates, and angry seagulls.

Gameplay-wise, it is a vertical shoot 'em up with bullet hell elements, similar to QP Shooting!, as players assumes the role of Marc as she pilots the Red Barrel throughout various stages as they cross paths with various characters along the way. While simple on the surface, as the Red Barrel is armed with machine guns and a stock of refillable rockets, the latter plays a major role of the game's scoring hooks and destroying enemies with your rockets will start a combo multiplier that increases both score and how much gold coins you receive, which also recharges your rockets and gain extends. Depending on what actions players perform throughout the story, it can change how the story unfolds and which one of the 18 possible endings they can discover.

The game was previously localized by Rockin' Android in 2009 and was released through Amazon, GamersGate, DESURA, Rice Digital, and for a time, directly through Rockin' Android's own website digitally and on CD-ROM, however, over time most of these platforms slowly dropped distribution of the game one way or another, with Amazon being the only distributor of the game for many years. On June 2, 2020, Fruitbat Factory, the publisher who has since published Orange_Juice's newer titles, has obtained the rights to the game and would go on to release an updated remaster of Flying Red Barrel on June 19th, 2020 through Steam. Various characters from Flying Red Barrel would go on to be featured in the virtual board game 100% Orange Juice!, as well as Marc appearing as a party member for its spiritual successor 200% Mixed Juice.