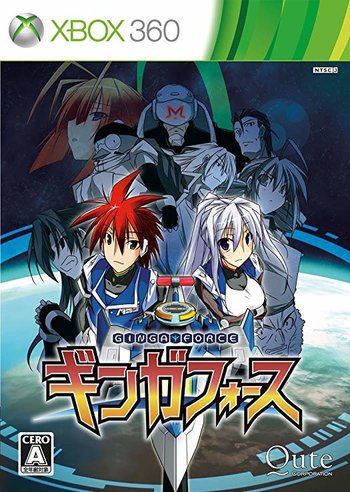 Ginga Force is a vertically-scrolling shooter for the Xbox 360 released in 2013. It is the Spiritual Successor to 2011's Eschatos.

In the far future, mankind has successfully expanded to the far reaches of the solar system. Six planets have been previously explored in the past and people had already emigrated there. Beyond the sixth planet lies a seventh Earth-like planet, Seven Tier. Seven Tier was considered a suitable planet for humans to live, and in the process, the planet also had a large amount of energy called "Septonium". The energy company called the "Magnificence Energy Corporation", or the Magni company, turned its eyes toward the Septonium. Soon after, Magni was successful in terraforming the planet, and people began to immigrate to the planet. A space police agency dubbed "Mitsurugi Security Service", or MSS for short, was formed for the sole purpose of protecting Seven Tier and its people. Alex Heatburn and his partner Margaret Whitetail are both pilots for the organization, flying the FV-G27 Enforcer in their missions under the callsign "Hound 1".

A spin-off, Natsuki Chronicles, was eventually released on Christmas 2019 for the Xbox One after several delays.

alongside Natsuki Chronicles. The ports in question were released on September 24th, 2020. The Steam release can be purchased here