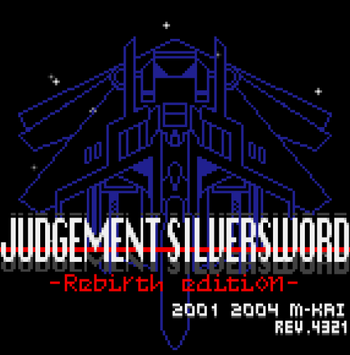 Judgement Silversword is a Vertical Scrolling Shooter developed by M-KAI for the WonderSwan Color handheld system and released in 2004. It is notable for being one of the first Bullet Hell games to be put on a portable platform. The game travels from Earth to an alien planet across 32 stages, with stages ranging anywhere between 10 seconds to 2 minutes, and are occasionally punctuated with Boss Battles.
Advertisement:

note Archived version by Wayback Machine. Instead of having traditional stage design, the player goes through 7 stages, each of which bear very different objectives (i.e. destroying all enemies, collecting extends, collecting medals).

Both games were re-released in 2011 for the Xbox 360 as part of a bundle with Judgement Silversword's spiritual sequel, Eschatos. A PC version of both was released in September 18, 2015 through Steam, and can be purchased separately or together with Eschatos; this version has JSS rebranded as Judgement Silverwird -Rebirth Edition- and features new music tracks. Another port of both games for Nintendo Switch was released in Japan on November 18, 2021 as part of the Eschatos rerelease on the same platform, with a PlayStation 4 version and international releases of both to come at later dates. Notably, it retains the English language option even in the Japanese release, but with some differences in text.