Video Game / Ginger Beyond The Crystal 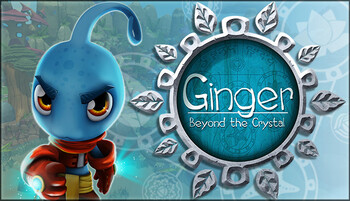 Ginger: Beyond The Crystal is a 3D Platform Game by Drakhar Studio. It was published by BadLand Publishing, and released for the PC on Steam on October 25th, 2016. It's also available on the Playstation 4 and Nintendo Switch.

The world has been destroyed by the explosion of the world crystal, and there is a mysterious threat hanging over its inhabitants. This world needs rebuilding, it needs a hero. And a goddess has created one. That hero is Ginger.

Ginger must explore 30 levels in three worlds, collecting items, rescuing people, and fixing the things that were broken by the crystal's destruction. This adventure goes beyond the crystal. Are you ready?

Ginger: Beyond The Crystal contains examples of: