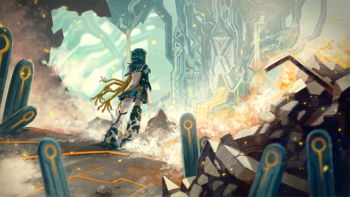 Giga Wrecker is a 2D physics-based Action-Adventure developed by Game Freak (yes, that Game Freak). The game was originally released for PC on February 7th, 2017 after a stint on Steam Early Access, with an Updated Re-release titled Giga Wrecker Alt releasing for PlayStation 4, Xbox One, and Nintendo Switch on May 2nd, 2019.
Advertisement:

One day, a mysterious army of deadly robots called the "Ajiths" suddenly appeared out of nowhere. Where they came from is unknown, but no matter their origin, the world was quickly decimated. Anyone who managed to survive the war found themselves desperately hiding in the ruins of human civilization or taken into slavery by their new robot overlords. Three years after the takeover, Reika Rekkeiji is in the latter position, awaiting her fate in a jail cell following the deaths of her friends and family... at least until a mysterious girl breaks into her cell to rescue her. The jailers quickly learn of the break-in though, so this girl goes with Plan B: pull a gun on Reika and tell our heroine that she's a kind person, but must die for the sake of humanity. Before Reika can even figure out where this girl came from, much less how she knows her name and what she's even talking about, the girl manages to shoot her arm clean off before being dragged off by some Ajith soldiers.

Fading in and out consciousness from blood loss, Reika gets a second visitor: the Mad Scientist Dr. Kouzuki, who promises to help her survive if she becomes his guinea pig. With her only other option being to bleed to death on a pile of rubble, she agrees, undergoing an operation to become a cyborg with ferrokinesis and the ability to manipulate nanomachines. With her new skills, and with the help of Dr. Kouzuki, humanity may now have what's needed to finally fight back and reclaim Earth.