Video Game / Gods Will Be Watching 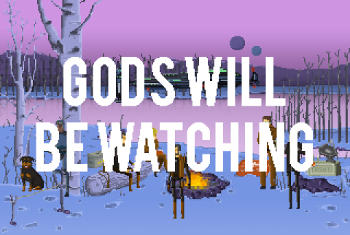 Gods Will be Watching is a point-and-click game made by Deconstructeam and published by Devolver Digital, released on July 24th 2014. It was originally a Ludum Dare 26 game where you controlled Sergeant Burden and his crew: a soldier, a psychiatrist, a doctor, an engineer, a robot and a dog. The goal was to survive for 40 days and to repair a broken radio, while at the same time making sure that the crew had enough food, medicine, warmth, ammunition and sanity. The game was later very popular and an expanded version was crowdfunded, until it was picked up and published by Devolver Digital.
Advertisement:

In the expanded game, you follow the story of Sergeant Burden and the aforementioned crew through six chapters, ranging from hostage situations to torture scenarios to just wilderness survival, on an alien planet filled with dangerous wildlife of course. The backdrop is one of struggle between Xenolifer, an anti-slavery terrorist organization, and the authoritarian Constellar Federation. There is no karma meter, and whether you value the lives of your crew over long-term consequences is entirely up to you.

The game is mainly characterised by stressful situations, hard decisions, being very difficult and requiring a good amount of trial and error to succeed. Contrary to other modern point-and-click games, Gods Will Be Watching is not about about combining items or bringing them to the right places, but rather is about resource management and hard choices. Every choice you make will mean another aspect of your survival is neglected. Choosing to calm down the hostage who's about to snap and run will cause the SWAT team just outside to inch closer, while taking a harder stance might end up with all of them dead and the SWAT having no problem with just charging in.

Gods Will Be Watching contains examples of:

Please do not add any character tropes to this page. The Characters page for the game can be found here.

Gods Have Been Watching.