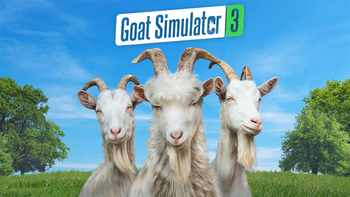 Goat Simulator 3* There is no Goat Simulator 2. is the sequel to Goat Simulator developed by Coffee Stain Studios. It was announced at the 2022 Summer Game Fest, and was released five months later on November 17th on Xbox Series X|S, PlayStation 5 and PC via the Epic Games Store.

Like the previous game, you play as a goat with the goal to explore a large map, now taking place on a fictional island named San Angora while causing as much mayhem as possible with various new powers, cosmetics, goats and secrets to uncover.