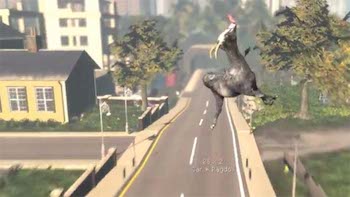 Oh yeah, this is normal, right?
"Goat Simulator is a small, broken and stupid game. It was made in a couple of weeks so don’t expect a game in the size and scope of GTA with goats. In fact, you’re better off not expecting anything at all actually. To be completely honest, it would be best if you’d spend your $10 on a hula hoop, a pile of bricks, or maybe a real-life goat."
—Coffee Stain Studios
Advertisement:

Pretty much Exactly What It Says on the Tin: Goat Simulator is a simulator game in which you play as a goat. Originally a silly experiment done internally by Coffee Stain Studios, but it unexpectedly gathered interest from gamers. Goat Simulator is a treasure trove of deliberately broken physics and silliness.

Several additional areas have been added or released as DLC:

or on Steam here.