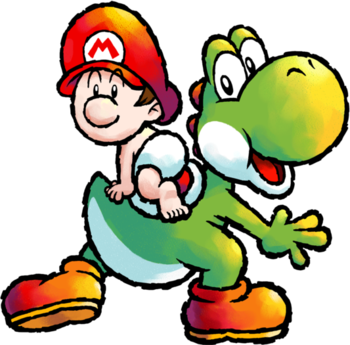 Yoshi's Island is a Spin-Off series of the Super Mario Bros. franchise.

The games all star Mario's faithful dinosaur steed Yoshi, who originally debuted in Super Mario World. An interesting aspect of the series is that most of the games in the series are Prequels to the rest of the Mario series. In addition to the eponymous dinosaurs, the games feature baby versions of the staple Mario cast. Much of the games feature a baby Mario himself riding the Yoshis, and one of the main goals of the series is to protect Baby Mario from being captured by the Koopas, led by a baby Bowser and his caretaker Kamek.

The gameplay of the series is very similar to that of its parent franchise: run and jump through an obstacle course with tricky jumps, enemies to stomp, and castles with bosses. However, there are also a lot of differences as well. Yoshi has a great deal of his own abilities such as a Flutter Jump, the ability to eat and turn enemies into eggs, and throw said eggs as weapons. Unlike the Mario series, levels have no time limits; as such the levels tend to be longer than usual Mario levels, often averting When All Else Fails, Go Right. In games involving protecting Baby Mario, Yoshi's "health" is a bubble of "Star Power" that decreases whenever Mario gets knocked off Yoshi's back; it decreasing to 0 counts as a death, though other hazards such as lava and spikes can kill Yoshi without him losing Mario.

Aside from platformers, Yoshi has also starred in various other games ranging from puzzle games like Yoshi's Egg and Tetris Attack to the Light Gun Game Yoshi's Safari. Elements from the Yoshi series have also been incorporated into the extended Mario series, with Baby Mario and Luigi often appearing in the spinoffs. Yoshi himself is a perennial playable character in the Super Smash Bros. series, where he is considered to represent this franchise as opposed to the Mario franchise where he originates.

Games in the Yoshi series: