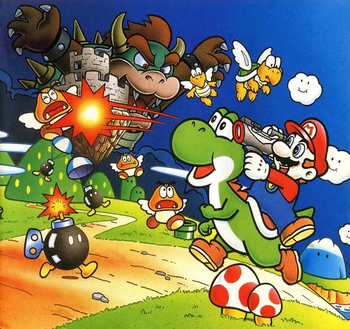 The game takes place in Jewelry Land. Mario and Yoshi are asked by Princess Peach to save King Fret and his son Prince Pine from Bowser and the Koopalings. Bowser has stolen twelve gems that keep Jewelry Land balanced. Without them an earthquake occurred that split the kingdom into two realms: the Light Realm and Dark Realm.

Yoshi's Safari was one of the very few titles to use the SNES' gun peripheral, the Super Scope (Nintendo Scope in the UK). Aside from being notable for being the only Rail Shooter themed Mario game, it's also the first time Princess Peach was referred to by that name (instead of "Princess Toadstool") in the West.