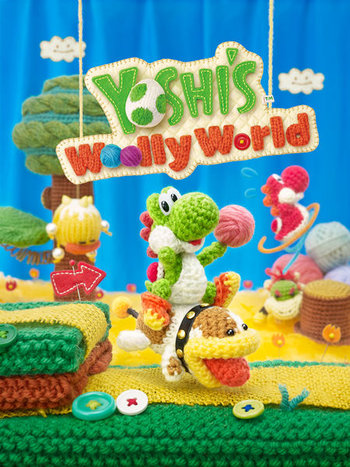 Yoshi's Woolly World is a platform game in the Yoshi's Island series for the Wii U, developed by Good-Feel and starring Yoshi. Surprisingly, it's also the first home console Yoshi game since Yoshi's Story (for the Nintendo 64) in 1997. Its gameplay is highly reminiscent of Super Mario World 2: Yoshi's Island and Story, but the game is also a spiritual successor to Kirby's Epic Yarn, a Good-Feel game for the Wii that shares the arts-and-crafts aesthetic.

Baby Bowser, up to his nasty tricks again, has ordered Kamek to transform the Yoshis into inanimate Wonder Wool and scatter them across the land. It's up to Yoshi (and Red Yoshi, if you’re playing co-op note or you just want to play as him instead) to journey across gorgeous landscapes made of cloth and yarn and retrieve the Wonder Wool. Several classic elements from Yoshi's previous adventures return, such as Chomp Rocks, Shy Guys, Huffin' Puffins, and clouds that burst open and spill goodies if Yoshi shoots a projectile at them. Instead of turning enemies into eggs, Yoshi can swallow bits of yarn from the environment to turn them into yarn balls. Yarn balls have multiple purposes; they can be used to uncover secrets, "knit" new platforms, and tangle up enemies to expose them for a good jump attack.

In your journey, you’re offered two modes for play: Classic Mode and Mellow Mode. In Classic Mode, you play through yarn-filled worlds as you would a typical platformer, collecting Wonder Wool, beads, and other goodies along the way. Mellow Mode is similar, but allows you to play as Winged Yoshi. Winged Yoshi can indefinitely flutter, allowing casual players to breeze their way through tougher stages. Either mode can be accessed at any time while the game is paused.

. amiibo functionality is also included; the game is compatible with Yoshi's figurines as well as a set of unique plush doll amiibo. Scanning these figures will allow you to create another Yoshi, which acts similarly to a second player. In addition, all other amiibo (except the Pokémon ones) can be scanned in to unlock themed patterns for Yoshi based on that character.

A 3DS version of the game named Poochy & Yoshi's Woolly World was announced on September 1, 2016 for release on February 2, 2017. This version includes new exclusive levels with Poochy along with the ability to summon Poochy-Pups to help out in a stage and find hidden secrets. This version also features creating custom designs for Yoshi, and Yoshi Theater which features 30 stop-motion shorts starring Yoshi and his buddy Poochy. The game is also bundled with a new yarn Poochy amiibo. A sequel for Nintendo Switch featuring a more general arts-and-crafts aesthetic, Yoshi's Crafted World, was later announced at E3 2017.