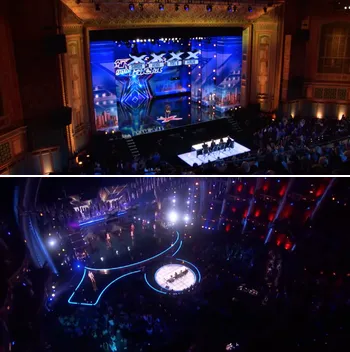 TOP: Week 1 of Auditions, BOTTOM: Season Finale.
Geordie: ...And [because it's a final,] it also means our judges are a pointless drain on our budget.
Geordie Too: Aye, but they're here anyway and wearing some fancy outfits like.
— The Two Geordies,note Seemingly Ant and Dec parodies Weebl & Bob, "Goo Got Talent"

This is it! The End! The Grand Finale! Strike up the band! (If we can now afford one!) "High-culture best" is the name of the host's and the judges' wardrobes! LIVE from Radio City Music Hall! Famous Celebrity Guest Stars! The Big 2-Hour Finale Timeslot! Everything is upped! The audience is HUGE, at least 5 times as large now! It's a PARTY! The competition is now serious, the stakes are high, the performances are big and flashy, the ideas are complex, the stage dressings are sleek, slick, imposing, and grand! A giant Confetti Drop for the winner!''

For your favorite adventure and drama series: More Special Effects! More Celebrity Guest Stars, Again! The Big 2-Hour Finale Timeslot, Again! More Locations and Sets! Plot Armor is off! Nostalgia callbacks, returning characters, and Continuity Cavalcade! More Risk! More Complex Stories and higher personal and emotional stakes!note (and this can still happen if the trope is subverted so there is another season!)

Not necessarily limited to live-action fictional stories, the Finale Production Upgrade is NOT a Grand Finale in story terms, but in production terms. This is more an all-encompassing trope either about how much a series has changed since its inception (its look, its approach to depicting the stories and performances; the camera work, the stage work, the props, sets, and the individuals), or how much has been changed as a special occasion for its season finale/series finale episode. A sort of Art Evolution for Live-Action. What was once harsh and in-need-of-work is now clean, crisp, clear, and inviting. What was humdrum and routine has now changed into something new and exciting! You may even see the production through a new lens, so to speak!

Although this is an entirely separate trope, there can be significant overlap between this and Grand Finale, due to the material, drama tropes, and changes involved.

If the production is a drama, and it's completely ending, the set will probably be disposed of anyway, so why not have a spectacular ending for it by destroying it in a blaze of glory?

If the series was bringing in relatively low ratings, an upgrade in a season finale was attempted in desperation to bring in viewers, and production effort for that finale story was good enough, it may result in the series Growing the Beard for the next season and beyond.

May lead to the series in-question receiving an Astral Finale, or it may be the upgrade that the series receives!

NOTE: This trope can also include media that had entries intended to be the permanent finale, but later brought back.

In cases of guest cast, this can be a contributing factor to Back for the Finale.

Because most of these examples are about increasing the quality and dramatic story elements of TV shows for finales, all spoilers will be unmarked.