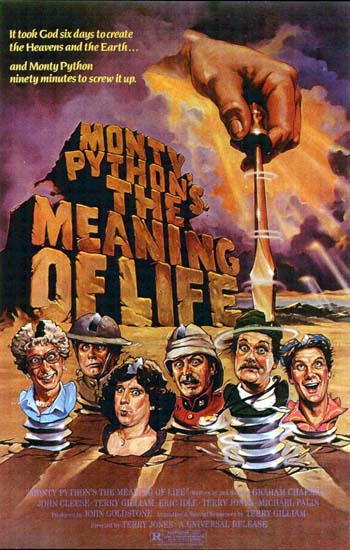 Why are we here?
What's life all about?
Is God really real?
Or is there some doubt?
Well tonight-
We're going-
to sort it all out,
For tonight it's the Meaning of Life!
Advertisement:

Monty Python's The Meaning of Life arrived in 1983 as the last hurrah of the complete six-man troupe, directed by Terry Jones. For the rest of the 1980’s, the Pythons grew apart and it wasn’t until the death of Graham Chapman in 1989 that they officially went their separate ways. The film marked the troupe's return to sketch-based comedy after two films that followed a linear plot. The film's sketches are loosely connected and arranged by the stages of human life.

The movie opens with the unrelatednote (or so it seems) Terry Gilliam-directed short film The Crimson Permanent Assurance, the tale of accountant pirates who take on Wall Street. From there, we move on to the film proper, a series of sketches purporting to examine the Meaning of Life, arranged from "The Miracle of Birth" to "Death". But even this structure allows for stops examining "The Third World" and "Live Organ Transplants".

This is notable as by far the grossest of the Python films, via such highlights as the aforementioned "Live Organ Transplants" sketch and the restaurant scene featuring the projectile-vomiting Mr. Creosote. That didn't stop it from receiving the Grand Prize of the Jury award at the 1983 Cannes Film Festival, however.

The Meaning of Life, Part 1 - The Miracle of Tropes...

Well, that's the end of the page, now here's the Meaning of Life: