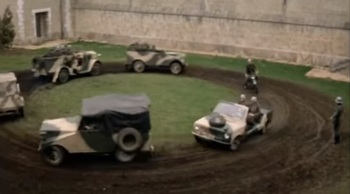 Alien Invasion. Natural Disaster. Kaiju attack. Big catastrophes naturally require a big response, and what better way to depict a big response than to show them mobilizing an entire army? There's only one problem: you can only afford twenty extras, two jeeps and three trucks... and one of those won't start.
Advertisement:

Thus was born one of the classic techniques of cinema: The circular drive. Need to depict an entire armored division with only three tanks? Simply drive them in a big circle that passes the camera and hope that nobody notices the markings don't change. You can turn a Suspiciously Small Army of twenty extras into an entire battalion if you frame your shot right. Note that this is not restricted to vehicles - pretty much any object will do, provided it can be steered appropriately. Takes advantage of the time-worn technique of having vehicles turn in front of the camera to add action to a scene, but the same three or four vehicles passing in the same repetitive sequence is going to be a dead giveaway. Alternatively, the same vehicle (or vehicles) may be noticeably present in multiple scenes for no apparent reason, which is particularly egregious when the scenes are supposed to be separated by time or distance.

Pretty much a Dead Horse Trope these days unless deliberately Played for Laughs. The modern equivalent is repeating the same airplane, boat or whatever multiple times using CGI. For a similar technique used in animation, see Wraparound Background.