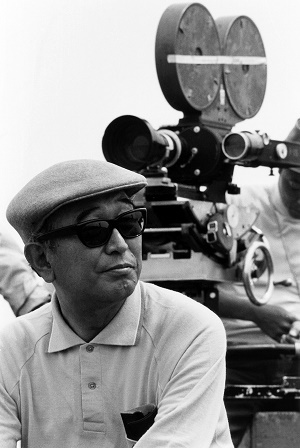 Like Kurosawa, I make mad films / K, I don't make films / But if I did, they'd have a samurai.
"It is wonderful to create."
— Akira Kurosawa
Advertisement:

Akira Kurosawa (黒澤 明, March 23, 1910 – September 6, 1998) was a famous Japanese director, mainly known in the West for his samurai films, such as Seven Samurai, Ran, and Yojimbo. Other notable films include: Rashomon, The Hidden Fortress, Throne of Blood, Ikiru, Dersu Uzala, and Sanjuro.

Born on March 23, 1910, Kurosawa is widely considered one of the best and most important directors of the 20th century. His 1950 film Rashomon was a world-wide smash, getting far more attention overseas than any prior Japanese filmnote Teinosuke Kinugasa's A Page of Madness actually did circulate in the silent era in Europe, and Mikio Naruse's Wife! Be Like a Rose! also played in America. It became the first non-American and non-European film to achieve international success, and it is considered a watershed moment in the birth of what is considered world-cinema. Japan had a film industry that was already quite fecund and productive by The '50s boasting many great films and film-makers from the silent to the sound era, but within the wider culture, Kurosawa is still the Japanese film-maker.

He made films that were very influential on many American and European film directors. They include George Lucas (the Star Wars series was heavily influenced by The Hidden Fortress), John Sturges (The Magnificent Seven is a direct remake of Seven Samurai) and Sergio Leone (A Fistful of Dollars is a direct remake of Yojimbo). His "Big Four" films (Rashomon, Ikiru, Seven Samurai, and Ran) are routinely included in lists of the best films of all time.

Excepting Ikiru, all of Kurosawa's films from 1948's Drunken Angel to 1965's Red Beard featured the actor Toshiro Mifune. In 1965, the two had a falling out during the production of Red Beard and did not speak or see each other until a brief, tearful reunion in 1993. There were rumors that they would have collaborated on Kurosawa's next film after his upcoming project After the Rain, but they both died within a year of each other, with Kurosawa dying before After the Rain began filming. There was another chance in 1975, as the Soviet producers originally wanted Mifune in the title role of Dersu Uzala, but it was prevented largely by Mifune's schedule. After 1965, there were only a few times where one spoke ill of the other, but otherwise they thought of each other — and their films together — with high regard.

The other actor most identified with Kurosawa is Takashi Shimura. Shimura appeared in Kurosawa's first film, 1943's Sanshiro Sugata and appeared almost every other one of Kurosawa's films through 1965's Red Beard. Unlike Mifune, however, Kurosawa and Shimura never had a falling out and remained friends until Shimura's death in 1982. Kurosawa wrote a small role for his friend in 1980's Kagemusha, which was cut from the Western release of the film (but has since been added back on The Criterion Collection DVD).

He was a notorious Prima Donna Director, to the point where he earned the nickname "Tenno" or "The Emperor". Kurosawa's personality and demeanor made him unpopular in the Japanese film industry,note Ran did not get a nomination for best foreign language film because the Japanese film board refused to submit it, out of spite and his films were often divisive within Japan. Japanese critics often slammed Kurosawa for being "too Western" and they had a point. Kurosawa adapted Western stories from Shakespeare, Gorky, and Dostoevsky, Yojimbo was an adaptation of Dashiell Hammett novel The Glass Key, and High and Low was an adaptation of a novel by Ed McBain. This went in the other direction as well, as Seven Samurai easily translated to Hollywood as The Magnificent Seven, and Yojimbo was remade as both A Fistful of Dollars and Last Man Standing.

Kurosawa also differed from earlier Japanese film-makers (like Kenji Mizoguchi and Yasujiro Ozu) for being quite macho and having very few prominent female roles compared to his predecessors and the general women-centric nature of Japanese cinema. Kurosawa also tended to write his own dialogues as he became more successful and rely less on screenwriters and Japanese critics often noted sardonically that his films improved in subtitles noting that to a Japanese audience, his movies often came off as sentimental, hokey, and as per Yukio Mishima having the maturity of a ten-year old.

Nonetheless Kurosawa's visual invention and creativity found public favour, and a number of his films had populist themes and subjects. The jidaigeki genre of Historical Fiction had been seen as high art before Kurosawa, with strict attention to detail and setting, but Kurosawa was keen on introducing anachronistic elements, and contemporary sentiments into period movies, making them allegorical and fantastic. For instance Rashomon musical score adapts Maurice Ravel's Bolero, his Samurai films drew inspiration from American Western, and he introduced the concept of adapting Shakespeare to feudal Japan which greatly inspired Shakespeare scholars and producers. Kurosawa's films often pivoted on the conflict between the young and the old, while taking the side of the rebels, misfits and nonconformists, who voice criticism of the past. As Kurosawa grew older however, his vision darkened, culminating in Ran which is considered his bleakest and darkest film.

One of his Production Posse was Daisuke Kato. Kurosawa's daughter had married Kato's son.

One of Kurosawa's disappointments was that he never was able to make a Godzilla film, as Toho turned down his requests to do it, fearing that Kurosawa's epic style would completely demolish the usual budget of the franchise. (It should be noted that he and Godzilla creator Ishir⁠ō Honda were lifelong friends, the latter starting out as assistant director for Kurosawa before making it big on his own. They would once again collaborate for Kurosawa's final five films.)

Despite his long and revered career, Kurosawa only won one competitive Oscar, when Dersu Uzala was awarded the Academy Award for Best Foreign Language Film in 1975. He also received an honorary Oscar in 1952 for Rashomon before a formal foreign language Oscar had been established. In 1986, Kurosawa earned his only nomination for the Academy Award for Best Directing for Ran. He wound up on the ballot after Japan controversially snubbed Ran as their submission for the foreign language category despite it being one of the most critically acclaimed films of the year, and other film directors petitioned the Academy to consider Kurosawa over their own work. Kurosawa lost that Oscar to Sydney Pollack, although he was invited to present Best Picture with Billy Wilder and John Huston. In 1990, Kurosawa received an Oscar for Lifetime Achievement at the 1990 ceremony. Said award was presented to him by Steven Spielberg and George Lucas and he accepted it in person. Kurosawa was the first Japanese, and first Asian, film-maker to receive the award.