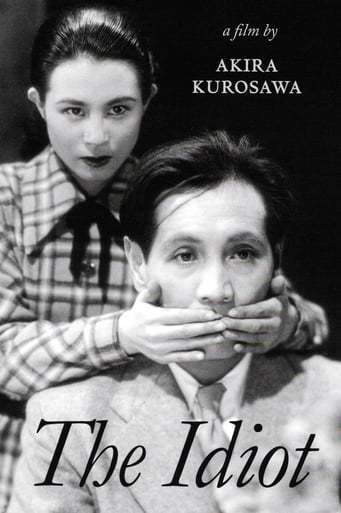 The Idiot is a 1951 film from Japan directed by Akira Kurosawa.

It is an adaptation of The Idiot by Fyodor Dostoevsky. Kameda is a soldier who was imprisoned by the Americans based on a case of mistaken identity. He narrowly escaped execution before his true identity was established, but has been left as an "idiot", which really means he has epilepsy, along with a permanent case of nerves ("epileptic dementia").

On the way home, he meets Akama (Toshiro Mifune, in a Playing Against Type role as a deranged psychopath), who has just inherited a large fortune on the death of his father. The over-chatty Akama confides that he is going to use his money to marry Taeko, the sexiest girl in town (Setsuko Hara, in a Playing Against Type role for an actress better known for Yamato Nadeshiko parts).

Taeko, as it happens, is the longtime mistress of a wealthy businessman named Tohata. Tohata has tired of her and is looking to unload her on a poor clerk, Kayama, with a ¥600,000 bribe to sweeten the deal. However, Kayama is in love with Anako, daughter of one Mr. Ono—who happens to be Kameda's only living relative, and the person he's coming to stay with.

Kurosawa's cut of this film was 266 minutes long; the studio cut 100 minutes from the movie. Forty years later Kurosawa tried to find the cut footage but failed.