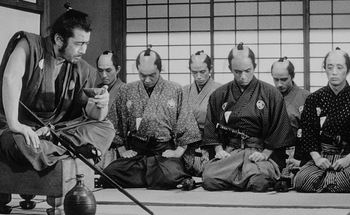 What Wolverine is to the X-Men, Sanjuro (far left) is to these guys.
"You're too sharp. That's your trouble. You're like a drawn sword. Sharp, naked without a sheath. You cut well. But good swords are kept in their sheaths."
—Mutsuta's wife to Sanjuro
Advertisement:

So, you're Akira Kurosawa, and you've made a pretty successful movie, Yojimbo. You had a good star, Toshiro Mifune, in a role that he was born to play, and Tatsuya Nakadai, a born Mifune antagonist, opposite him. Your story is so good that it will later get swiped wholesale by Sergio Leone. You can't go to Tokyo Disneyland because it's twenty years away from opening, so what do you do now? Well, a sequel, obviously.

Kurosawa had been writing a film adaptation of the novel Peaceful Days by Shugoro Yamamoto, with the intention of having his assistant director Hiromichi Horikawa direct the project. In response to the popularity of Mifune's character in Yojimbo, the script was rewritten to have Sanjuro be the titular main character, and Kurosawa decided to direct the film himself.

While Yojimbo was a dark comedy about a wandering Rōnin manipulating two criminal organizations into mutual self-destruction, Sanjuro (1962) is a lighter comedy teaming the same character up with ten wacky sidekicks, plus a character who misses out on the whole Jewish Mother stereotype only by being Japanese.

Despite its relatively rushed production (getting released less than eight months after Yojimbo's premiere and being adapted from a work that didn't even have its lead character originally), it turned out to be a damn great sequel.