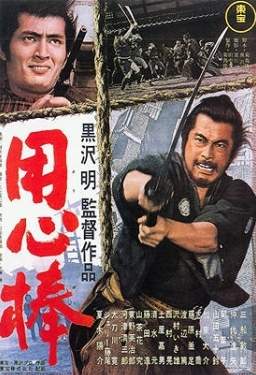 "I'll get paid for killing, and this town is full of people who deserve to die."
— Sanjūrō
Advertisement:

Yojimbo (Yōjinbō, 用心棒, meaning "bodyguard") is a 1961 Jidaigeki film directed by Akira Kurosawa, loosely based on Dashiell Hammett's novel Red Harvest. It stars Toshiro Mifune as a wandering rōnin who arrives in a town beset by criminals and decides to clean the place up (apparently for fun and profit). His method is simple, yet clever: he reduces the number of gangsters in the town by getting the two rival factions to go to war, then mops up the remainder. When asked about his name, he looks at a mulberry field and answers "Kuwabatake Sanjūrō".

An enormously influential film, it has had at least three direct remakes — Sergio Leone's A Fistful of Dollars (as a Western), Walter Hill's Last Man Standing (as a mob movie) and Albert Pyun's Omega Doom (as a sci-fi movie) — as well as homages in numerous other films and television shows, including being the inspiration for John Belushi's Samurai character on Saturday Night Live.

A year later it got a sequel titled Sanjuro, which is a bit more light-hearted.

Not to be confused with Usagi Yojimbo.