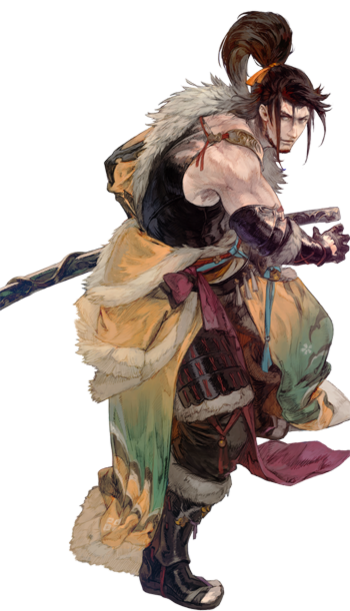 A common physical trait found in samurai or Japanese nobility is long hair bound up near the back of the head or almost at the top. Generally, this will fall into two categories.

First, when signifying nobility, it shows that a character is cultured, traditional and otherwise showing classical Japanese virtues. In this case, the hair will be long, straight, very clean and neat. Normally, they will be stoic or reserved. Frequently, such a character is also martially adept and it will show in their manner.

The second way this is used is to simply give a quick cue that someone is a samurai. In theory, samurai are supposed to be noble and cultured as well, but it is not uncommon for them to have their appearance much less cared for presumably due to not having the time or inclination. The hair itself will also frequently be a good deal shorter. In terms of mannerisms, if someone has this second style of hair they will be less clean and organized and are frequently more gruff, down to earth or aggressive in their attitude.

In both cases, the hair can be seen as a status symbol. Even a thug samurai has a certain level of social class that they are supposed to uphold.

Compare Sailor's Ponytail which is the closest Western equivalent, and Hime Cut which is another haircut indicative of status. See also Tomboyish Ponytail, which can have similar connotations to the second type, and Barbarian Longhair.