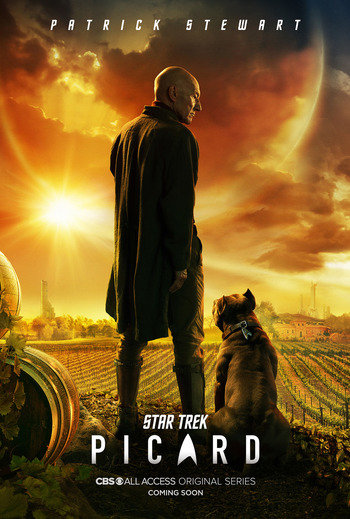 The end is only the beginning.
"What was it that you lost faith in, Admiral? You've never spoken about your departure from Starfleet. Didn't you, in fact, resign your commission in protest? Tell us, Admiral. Why did you really quit Starfleet?"
Advertisement:

Star Trek: Picard is a TV series set in the Star Trek universe. Patrick Stewart reprises his role of Jean-Luc Picard from Star Trek: The Next Generation. Set in 2399, 20 years after the events of Star Trek: Nemesis, Picard is now a retired Admiral and is a changed man as a result of the destruction of the planet Romulus. Living on his family vineyard, he's approached by a mysterious woman looking for help. This leads him on a new journey, reuniting with old friends and seeking new allies for one more mission.

The series premiered on January 23, 2020 on what is now known as Paramount+, and its first season consists of 10 episodes. Shortly before its debut, CBS was confident enough in it to greenlight a second season. Outside of the US, Canada premiered it same-day on the CTV Sci-Fi channel and on the French sci-fi network Z, as well as on the Crave streaming service, while Amazon made it available next-day to over 200 countries via country-specific Prime Video services as well as over the Prime Video Global service.

It won an Emmy Award for Outstanding Prosthetic Makeup for a Series, Limited Series, Movie or Special.

open/close all folders
Tropes A to C
Tropes D to F
Tropes G to L
Tropes M to O
Tropes P to S
Tropes T to Z
"The past is written. But the future is left for us to write."
Feedback

In "Broken Pieces" from "Star Trek: Picard," Admiral Kirsten Clancy tells Picard, with all due respect, to shut up, only even less politely than that.

In "Broken Pieces" from "Star Trek: Picard," Admiral Kirsten Clancy tells Picard, with all due respect, to shut up, only even less politely than that.