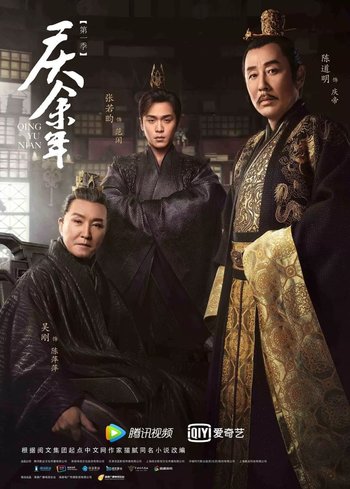 From left to right: Chen Pingping, Fan Xian, and the Emperor.
Advertisement:

Joy of Life (Chinese: 庆余年; pinyin: Qìng Yúnián), also known as Thankful for the Remaining Years, is a 2019 Chinese drama starring Zhang Ruoyun, Li Qin and Chen Daoming, based on the novel series of the same name by Mao Ni.

In the modern day, a young man with a terminal illness dies, only to be reborn in imperial China with all his memories intact as the illegitimate son of Fan Jian, the assistant financial minister to the Emperor, and Ye Qingmei, a woman who was assassinated under mysterious circumstances soon after his birth. Now named Fan Xian, he is raised in the countryside province of Danzhou at his grandmother’s estate where he completes an apprenticeship with Fei Jie, a master of poisons and medicines, and learns martial arts from his mother's former servant, a blind man named Wuzhu, until one day, an attempt on his life and a summons from his father lead him to journey to the capital. There, despite his best efforts, he is soon drawn into the political plots revolving around the royal family and a powerful organization answering only to the Emperor known as the Overwatch Council.

Part political drama, part comedy, and part science fiction, the series follows Fan Xian’s journey as he navigates imperial court and world politics even as he insists that all he wants is to simply use this second chance at life to live as well as possible, unraveling along the way the secret behind the world he’s in and his arrival in it, the mystery of his mother’s murder, and what it truly means to live a life of fulfillment.

The first season, with 46 episodes, can be watched with English subtitles on Youtube