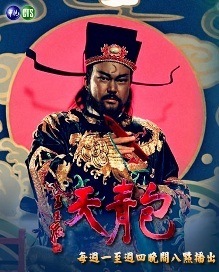 Poster for the 1993 series
Advertisement:

A popular Chinese TV series based on Bao Zheng, a Song-era official of Kaifeng who was known for his justice and fairness. The 1993 Taiwanese show (starring Jin Chaoqun as Bao) ran for total of 236 episodes. A previous 1974 Taiwanese series ran 350 episodes. A partial remake Chinese series later aired in 2008 for total of 61 episodes and a sequel in 2010 for 120 episodes.

As an aside, there are actually many movie and serial adaptations of Bao Zheng since 1967. Jin himself played Gongsun Ce in the 1974 TV series, with Fan Hongxuan (93 series's Gongsun Ce) as Emperor Renzong in the 74 series.