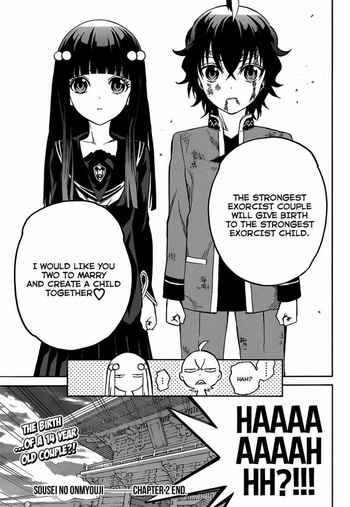 And they say romance is dead...
Victoria Everglot: What if Victor and I don't like each other?
Lady Everglot: Ha! As if that has anything to do with marriage.
— Corpse Bride
Advertisement:

Very few people would want to be part of an Arranged Marriage, but it's not all bad. After all, usually your parents are the ones selecting your spouse, and they know you and love you and want you to be happy. Or at the very least, they don't want you throwing a tantrum at the altar and destroying the alliance they've been planning for years. They may have other, higher priorities than your happiness, but your happiness does usually matter. Therefore, there is at least some prayer that your spouse will be someone you could grow to love.

Not in these types of marriages. The people arranging this marriage don't care about your feelings. In fact, they probably don't even know you. To them you're just an ID number that needs to be paired up with another ID number, and you're going to be, whether you want to or not.

Maybe the government needs you to marry someone in order to secure an important alliance. Maybe you're the next link in the super-soldier breeding program. Whatever the reason, the powers that be have declared that this marriage has to happen.

A subtrope of Arranged Marriage. Note that whether or not an arranged marriage qualifies for this subtrope depends on who is arranging the marriage and the relationship between the arranger and the people getting married. The person arranging the marriage needs to be an impersonal force, not a close relative. If the King is ordering the marriage of two of his subjects, that may be this trope; if he's ordering the marriage of his daughter the Princess, it isn't. Also note that this can overlap with Perfectly Arranged Marriage: sometimes, the bureaucracy's computer is pretty good at pairing compatible people. And if not, there's always plain luck. Often a part of Altar Diplomacy, where the match is made for political reasons.