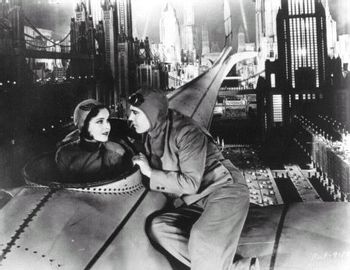 Ahhh, the Eighties. Those were the days...
Buildings 250 stories high!... traffic on nine levels... rockets that shoot from star to star... airplanes that land on the roofs of buildings... a whole meal in a capsule that can be swallowed in one gulp... No — this isn't a Jules Verne dream induced by a Welsh rarebit. It's New York in 1980, as foretold in the new Fox picture, "Just Imagine!"
— Photoplay, November 1930
Advertisement:

A big-budget Science Fiction musical comedy film from 1930, featuring the most impressive special effects seen up to that time. The animated model of New York City was large enough to fill a zeppelin hangar and cost a quarter million dollars to build — and this during the Great Depression!

Unfortunately, it was a complete flop.

In the distant future of 1980, marriages must be approved by the courts, based on one's value to society. J-21 (John Garrick) can't get permission to wed the beautiful LN-18 (Maureen O'Sullivan), as his rival, the wealthy and arrogant MT-3 (Kenneth Thomson), is more socially prominent. J-21 appeals the decision and is given six months to distinguish himself. As scientist Z-4 (Hobart Bosworth) has just invented a "Rocket Plane" spacecraft, J-21 volunteers to be the first man to fly it to Mars. His anachronistic friend Single-0 (El Brendel) stows away on the Interplanetary Voyage in order to provide Plucky Comic Relief.

Not related to the comic series by Stan Lee.