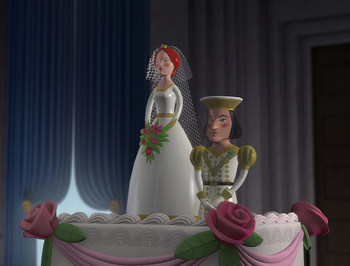 "If you haven't met the perfect couple, let me introduce you. They stand atop a layer of butter-cream frosting. The secret of their success? Well, for starters, they don't have to look at each other."
— Mary Alice Young, Desperate Housewives
Advertisement:

There is a tradition of putting little bride and groom figurines on top of the wedding cake. At some point, there became a film tradition of using a shot of the figurines to tell us about the wedding. This occurs particularly if there is something unusual about the bride and groom that they can show in the figurines; e.g., a gay or lesbian wedding, an interracial marriage, or that the groom is a huge Packers fan. Just as often, it can be a commentary or joke on the wedding or the marriage or sometimes just to establish the scene at the reception, with the amount of damage to the cake indicating time passed.

If left at the altar, expect a character to take out their frustration on the half of the cake topper that left them. Or talk to it while weeping.

Then there's that one guy who tries to eat it.