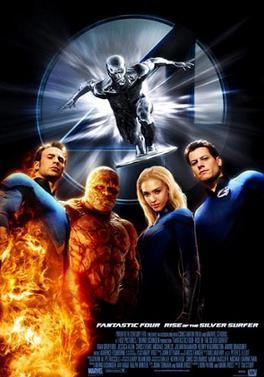 Fantastic Four: Rise of the Silver Surfer is a 2007 film directed by Tim Story and the sequel to Fantastic Four (2005).

The sequel had the wedding of Reed and Sue being canceled by the arrival of more urgent matters: the arrival of the Silver Surfer (Doug Jones for the motion capture, Laurence Fishburne for the voice), the "herald" for the planet-consuming being Galactus, who in this movie is a giant planet-eating cloud. Loosely based on the Ultimate Marvel Ultimate Galactus Trilogy written by Warren Ellis.

On the eve of Reed and Susan's marriage, a series of anomalies begin emerging across the globe, resulting in strange climactic shifts (such as snow in Egypt). While initially downplayed, eventually the US government reaches out to Reed in order to explain the sighting of a strange, silver, comet-like object in the vicinity of the events. Although doing his best to preoccupy himself with his wedding, Reed can't help but examine it closer, which leads him to the startling realization that the end of the world could be imminent.

Incidentally, the movie brought to light a What Could Have Been story behind the story; that of the 1992 short film featuring the Silver Surfer

, which broke every rule in Hollywood's book to even exist, and which was also the first film to utilize the CGI software which would later be made famous for creating the dinosaurs of Jurassic Park.

Has a Character Sheet with characters from both movies.