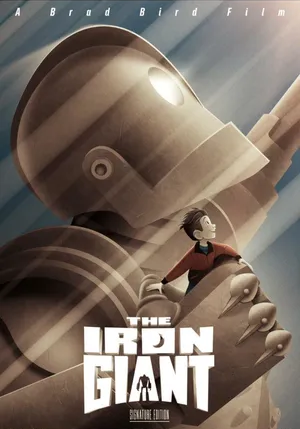 "You are who you choose to be."
— Dean McCoppin, later used by Hogarth Hughes
Advertisement:

Directed by Brad Bird (who was one of the original directors of The Simpsons and would later move on to work for Pixar), The Iron Giant is a 1999 animated film from Warner Bros., based on Ted Hughes' novel The Iron Man (not to be confused with the comic book).

In 1957, the titular Iron Giant (voiced by Vin Diesel) falls to Earth, and a boy named Hogarth Hughes (Eli Marienthal) befriends him. Hogarth tries to hide the Giant from the public (particularly due to Cold War-era paranoia), especially a persistent government agent named Kent Mansley (Christopher McDonald). But the Giant has a very mysterious past of his own, and if things get out, the Cold War may just go hot...

The movie was executive produced by The Who's Pete Townshend, who loved the original story and had previously done a Rock Opera based on it. A 2015 "Signature Edition" of the movie adds two scenes.

The Iron Giant is set to appear as a playable fighter in MultiVersus. He also appears in the film Ready Player One (2018), but it's not the actual character, but rather a custom avatar skin option covering a mecha vehicle.

open/close all folders
#-E
"Hogarth? What an embarrassing name. Might as well call him Zeppo or something. What kind of a sick person would name a kid Hogarth?"
F-J
Advertisement:
K-O
P-T
U-Y
Feedback

A classic example; Mansley is so determined to take down the Iron Giant that he calls a nuke on it, failing to acknowledge he's within the target's vicinity.

A classic example; Mansley is so determined to take down the Iron Giant that he calls a nuke on it, failing to acknowledge he's within the target's vicinity.