Villain Over for Dinner 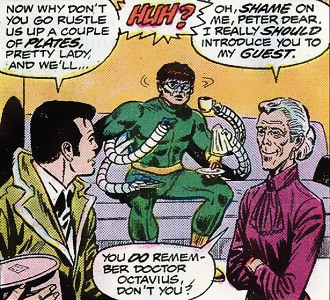 Won't Peter be excited? Otto can be just like dear Uncle Ben!
Advertisement:

After a hard day of fighting the forces of not-niceness, the hero goes home for some much needed rest. But who should they see having tea with their mom but the Big Bad! The sheer, mind-breaking disconnect of the embodiment of strife, hatred, evil and missing-left-socks engaging in polite conversation over tea and snack will throw the hero into a combination of wordless shock and sheer panic. She invited him in.

This is usually a horrifyingly difficult dilemma for the hero, doubly so if they have a Secret Identity. Attacking the villain outright will endanger their loved one and reveal the secret... that is, if the villain isn't secretly training a gun on them as a form of collateral to enforce a civil, if tense, social exchange. What usually happens is the Big Bad gets the first move and delightedly forces the hero to play along, as if they really were having tea with a friend. Expect the hero, villain and Innocent Bystander to have a tense (and potentially hilarious) veiled conversation.

A few things can happen from here:

See also Safety in Muggles. Compare Go-Karting with Bowser, Friendly Enemies. See also No, Mr. Bond, I Expect You to Dine and Why Isn't It Attacking?. May overlap with Villains Out Shopping if the encounter is not planned and is just a result of the villain's everyday, mundane activities unrelated to their villainy. A major reason things don't boil over is usually both parties respecting the Sacred Hospitality trope. Villain Over for Dinner is distantly related to Did We Just Have Tea with Cthulhu?. Also see Nonviolent Initial Confrontation.