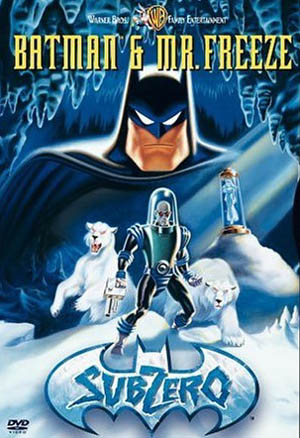 The second movie spun off from Batman: The Animated Series. If you were looking for the time Batman actually met Sub-Zero, that didn't happen for a few more years (and Mister Freeze wasn't involved).

Victor Fries alias Mister Freeze has made a home for himself in the Arctic, where he has the peace to continue working on a cure for his cryonically preserved wife, Nora, in the company of Inuit boy Kunac and two fully grown polar bears. As you might expect, this doesn't last long — a luckless submarine crew has the misfortune to surface right in the middle of his home, shattering Nora's preservation chamber. Enraged, Victor turns his freeze gun on them all before returning to Gotham in search of help.

The good news: He finds an old colleague, Dr Gregory Belson, who is heavily in debt and desperately in need of a windfall — which Victor can provide, having discovered a large vein of gold in the Arctic. The bad news: The only thing that can save Nora is an organ transplant, there aren't any deceased donors with her rare blood type, and any living one would die. Victor is undeterred, and the two of them quickly pick a target: Barbara Gordon.