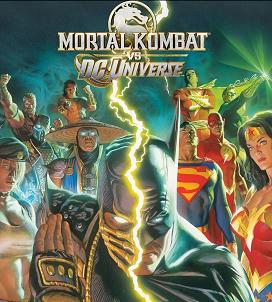 "Face each other, or face me? It makes no difference! YOU! WILL! FIGHT!"
— Dark Kahn
Advertisement:

Mortal Kombat vs. DC Universe is a Fighting Game launched in 2008 for Playstation 3 and Xbox 360. It's a Crisis Crossover between the Mortal Kombat and DC Universes, featuring characters from both sides beating the crap out of each other.

This game stands out from similar Crossover Fighting Games by having an actual plot, which is strictly followed in story mode – instead of picking up the characters, you choose a side and play the story with all of them, in order. Both sides' story happen in the same time and space. It's set up between Mortal Kombat 3 and Mortal Kombat 4, and it's considered a Spin-Off and an Elseworld respectively.

In Metropolis, upon his defeat at the hands of Superman, Darkseid tries to escape, using a BoomTube, but Superman blasts him through the portal. Meanwhile, in another universe, Shao Kahn's invasion on Earthrealm has failed and he's blasted by Raiden's thunder right into the magic portal. It seems that peace has returned to both worlds. But it doesn't last long. Quickly, heroes, villains, and fighters from one universe gets transported to the other, both world's magic is disturbed, while powerful, irrational rage starts randomly taking over the characters, making them brutally attack anybody they see, even their allies.

The game features the following characters:

It also features some unique minigames which you can play during a fight, such as the Freefall Kombat, (which happens if you throw your opponent out from the ring, your character will jump after him and, if you push the right buttons at the right time, kick his ass in the air, before landing on a new arena), Klose Kombat (a guessing game where you try to block your rival's hits during up-to-four turns), the return of Test Your Might as a mid-battle event, replacing the Freefall Kombat in enclosed areas, and the plot-pointal Rage, a temporary Limit Break where you can't be hit-stunned and where you're able to do a load of damage in six seconds.

The reception of this game was somewhat mixed, and marked the end of Midway Games. Interestingly enough, the Mortal Kombat franchise is now owned by Warner Bros., which also owns DC Comics. So, who knows, they may give this series another shot if they feel so inclined.

There is also a comic adaptation that introduces both the Big Bad and how his actions lead to the worlds merging.

See also Capcom vs.. Spiritually succeeded by Injustice: Gods Among Us and Injustice 2 from by Nether Realm Studios, the same studio responsible for Mortal Kombat 9, Mortal Kombat X, and Mortal Kombat 11. Scorpion appeared as a Guest Fighter in the first game, and Sub-Zero and Raiden appeared as guests in the second.