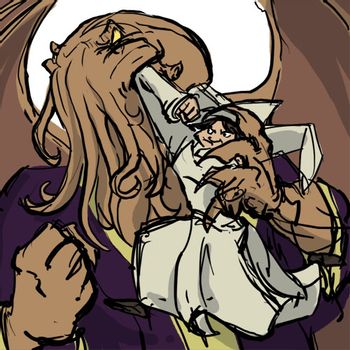 A character who has been captured but certainly not cowed.

Let's say Alice has been captured, but instead of docilely doing what she's told, she resists attempts to control her. She may attempt to reason with her captor or play mindgames from her cell. If they explain The Plan behind her kidnapping, she'll point out everything wrong with it. At most passive, she'll engage in Passive-Aggressive Kombat or a hunger strike. At her most active, she'll try to escape. Whether or not she succeeds is irrelevant; the point is that she's doing all she can to make life difficult for her captor in spite of the situation.

The Badass in Distress will usually be defiant. This can overlap with Defiant to the End if not even the prospect of death can break her. If she is resilient to the point it causes more abuse for whoever tried to capture her, you may be inclined to Pity the Kidnapper. It has been said that the duty of any Prisoner of War is to force their captors to dedicate as many resources as possible to holding them rather than fighting their still free and fighting comrades.

Contrast Damsel in Distress, who generally is too frightened, inexperienced, or helpless to put up a fight; compare Damsel out of Distress, who rescues herself.

Despite the female pronouns used in the description, this is a gender neutral trope.