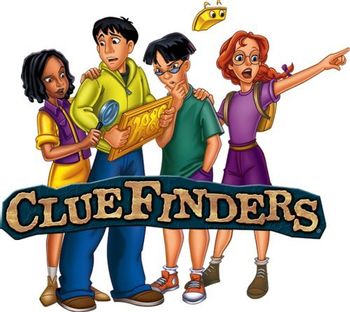 L-R: Leslie, Santiago, Owen, LapTrap, and Joni
The ClueFinders is a series of Edutainment Games from The Learning Company. The eponymous Kid Detectives consist of adventurous tomboy Joni Savage, brilliant mechanic Santiago Rivera, cool dude Owen Lam, and bibliophilic expositor Leslie Clark. They are accompanied by LapTrap, a hovering yellow robot who provides the game options for the player.
Advertisement:

The series is aimed at kids aged eight to twelve, having been a follow-up to Reader Rabbit, which is aimed at kids aged up to seven or so. Generally, each ClueFinders game features the kids having to solve a thrilling mystery, often in some type of exotic locale like a tropical rainforest, Egypt, or (one time) an alien planet. The kids are nearly always split into two separate coed teams, but you're able to contact the other team for help using the red videophone. The actual gameplay tends to be heavy on Alphabet Soup Cans and Fetch Quests. ​Most entries in the series have some kind of third-act twist, in which the answer to the mystery is revealed. Usually, there are enough clues to at least guess at the answer to the mystery ahead of time.

In addition to the computer games, the ClueFinders also appeared in two print books, The Mystery of Microsneezia and The Mystery of the Backlot Banshee, both written by Ellen Weiss and published in 2004.

Tropes exclusive to the spin-off books:

The enigmatic leader of the four villains who had orchestrated the traps that the Clue Finders found themselves in reveals who they really are...

The enigmatic leader of the four villains who had orchestrated the traps that the Clue Finders found themselves in reveals who they really are...