Manga / The Prince of Tennis 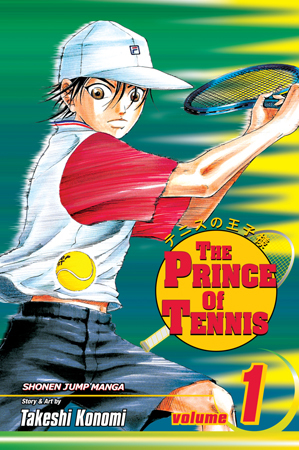 The Prince of Tennis is a long-running sports manga series, and has spawned an anime, live-action movie, video games, and over a dozen musicals. What's it about? Well, "boys playing tennis".

Okay, but seriously, folks... the story's about this kid named Ryoma Echizen, a pre-teen tennis prodigy who transfers to Seishun Academy (nicknamed "Seigaku" by everyone, a portmanteau of Seishun Gakuen), a school renowned for its rich tennis tradition. In the intra-school ranking tournament, he beats some of the best players in the school and secures himself a spot on the team's starting lineup. From then on, the series follows the Seigaku tennis club's progress towards the middle-school National Championship, facing a new rival team in each new story arc. The characters develop their own styles of play (complete with increasingly bizarre and complex shots). Even the sometimes hard-to-approach Echizen eventually learns what the sport means to him as time goes on.

The manga ran in Weekly Shonen Jump from 1999 to 2008, with over 40 volumes and 40 million copies sold in Japan alone. The sequel, Shin Prince of Tennis, is currently ongoing in Jump Square and also has a 13-episode anime adaptation. A Live-Action Adaptation Movie was also made, as well as two live action TV dramas. Two animated movies have also been released in cinemas: The Two Samurai: The First Game, co-released with short movie A Gift from Atobe (2005) and The Battle of the British City (2011). A 3D film, Ryoma! Rebirth Movie The Prince of Tennis, covers the 3-month time period in between the original manga and Shin, to be released in 2021. Funimation announced in April 2021 that it has licensed the majority of the anime installments with a new English dub to come in the future.

Also! The character sheet has been added. PLEASE, if you've got new tropes for the characters of the series, add them there.

Also, there is the Musical Series page, so you can add tropes related to the stage plays and actors.

Alternative Title(s): The Prince Of Tennis