Battle Amongst the Flames 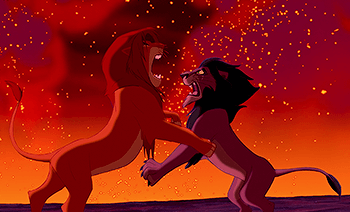 A heated battle.
"Only a fool fights in a burning house."
— Seldom heeded Klingon proverb
Advertisement:

Battles are awesome. Know what's even more awesome? Having a battle while the area is on fire!

Yes, it seems that, in many instances of fiction, the epic battle between good and evil occurs during a wildfire of some sort. These fires are often caused by explosions, random lightning hitting a tree, or by the hero/villain him/herself. In either case, it makes the battle itself more dramatic and more exciting to the viewer.

This will always be extremely guilty of Hollywood Fire. As long as you don't touch the fire, you'll be fine. Also, you won't tend to see smoke inhalation affect the combatants much, even though smoke inhalation is the most common killer in real fires.

May overlap with Faux Symbolism if the idea is that two are battling each other to the death in Hell.

Compare Infernal Background, and Battle in the Rain which is like this, only... in the rain. If the rain's during a lightning storm, both may happen at the same time. Can also overlap with Collapsing Lair.