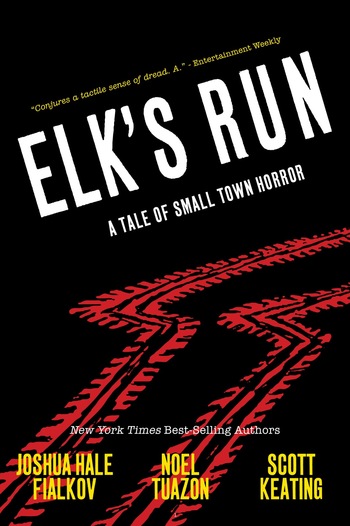 John Kohler Sr. came out of Vietnam broken, wanting only to never again see so much suffering and despair. Rejected from post-war society, he and his friend Walt Gronski made a society of their own, and many other veterans who wished for a new life were invited to the newly-established town of Elk's Run. Through strict rules and deliberate isolation, they built themselves a paradise free of both want and unnecessary luxury.

But now a boy is dead, and the man who accidentally killed him has faced rougher justice than outside courts would provide. Policemen from outside are coming to investigate, and inside the town the veneer of perfection is starting to peel off. And the children of the veterans, led by John Kohler Jr., are starting to ask themselves a question—is it better to stay or to go?

Tropes in Elk's Run include: