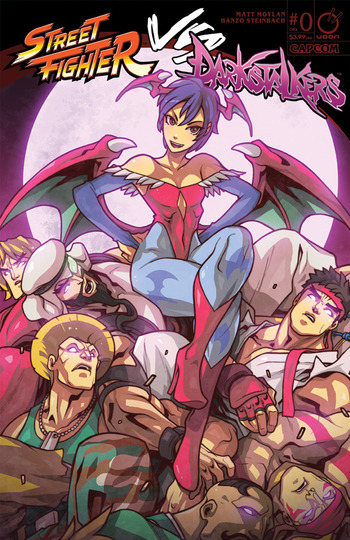 Street Fighter vs Darkstalkers is a crossover series by UDON between the two Capcom franchises clashing against each other. This event was preluded in previous titles such as Street Fighter Legends: Cammy where with each issue featured preview chapters with Darkstalkers facing against off against the fighters. After Gill's death at the hands of Ryu in Street Fighter Unlimited, his soul ends up being sent to the demonic realm of Makai where he is found by none other than Jedah Domah, who has also fallen from grace and proposes an alliance with the dark messiah to reshape the universe to their will. They send out Lilith to gather several warriors to his makeshift realm of Majigen and use their energy to complete their nefarious plan and unleash chaos upon the human world. The only hope of salvation lies in the martial artists and the dark monsters teaming up to stop the villains from fulfilling their goal.

The story is an adaptation of Vampire Savior that features the same set up of warriors being gathered to the Demon Realm to serve as fuel for Jedah's evil plans, the difference being that Street Fighter characters from across its series are featured and gain prominence here. The series is scheduled to be 8-issues long, with the Issue #0 being released on February 2017.

Street Fighter vs Darkstalkers features examples of the following tropes: