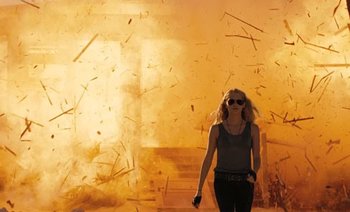 So I did leave the oven on.
"Cool guys don't look at explosions
They blow things up and then walk away
Who's got time to watch an explosion?
There's cool guy errands that they have to walk to"
— The Lonely Island, "Cool Guys Don't Look at Explosions"

When just blowing something up isn't enough, proof of one's apparent badass bombing technique can be seen when the bomber leaves himself barely enough time to escape the blast radius, usually just enough so that as he's walking away, he's silhouetted by the explosion itself.

While explosions are the most common thing to walk away from without looking or reacting to, any sufficiently spectacular or violent event (such as a battle, a vehicle crash, a building collapsing, etc.) can also count, as long as the one walking away was connected to the event and the event is something that they would be expected to pay attention to, or at least attempt to take cover from.

Besides making the character look awesome, this usually also implies they were directly involved in the disaster — after all, why else would they casually ignore something that spectacular unless they knew it would happen? Also, as noted in the Real Life section, turning away from an explosion actually has a practical reason, in that even if explosion does hit the body, backside is much safer compared to face and other important human parts that are on front. (But although there's a practical side in facing the other way, there's nothing practical about allowing yourself to be so close to the explosion in the first place. That part is pure Rule of Cool.)

Can be combined with a Power Walk for extra badassitude. Likely requires Convection Schmonvection, or there is convection, and the fact that the character is still unflinching further confirms badassitude. When the character was in the fireball, and still pulls this off, that's usually a sign that they're an Implacable Man or The Juggernaut.

Compare Outrun the Fireball (when this is done running), Strolling Through the Chaos. Contrast it with The Slow Walk, where the character is walking towards danger (in order to lay a major beat down) and Power Walk, where one or more characters walk towards the camera while giving off an air of determination. Contrast Unflinching Faith in the Brakes.

Keep walking, keep shining
Don't look back, keep on walking
Keep strutting, slow motion
The more you ignore it, the cooler you look!

Alternative Title(s): Walking Away From The Explosion